To celebrate the birth of Robert Burns, Scotland’s bard, here’s a bit of poetry.

If you’ve never been to a Burns Supper, get it on your bucket list

ODE TO A HAGGIS

Fair fa’ your honest, sonsie face,
Great Chieftan o’ the Puddin-race!
Aboon them a’ ye tak your place,
Painch, tripe, or thairm:
Weel are ye wordy of a grace
As lang’s my arm

The groaning trencher there ye fill,
Your hurdies like a distant hill,
You pin wad help to mend a mill
In time o’need
While thro’ your pores the dews distil
Like amber bead

His knife see Rustic-labour dight,
An’ cut you up wi’ ready slight,
Trenching your gushing entrails […] I am on my way back to Edinburgh, Scotland where I will be for the next week, spending some time with my parents.

I’ll be available by just about all of the usual means, but if you can’t find me and need something urgently, be sure to call the office or jump on Live Help.

Shades of 2006 as Scotland look to the future

As we all get excited about the upcoming World Cup in South Africa, Scotland (who failed to qualify yet again) are starting the rebuilding process.

Tonight was new manager (and former Hearts player and manager) Craig Levein’s first game in charge and it went very well as we beat the Czech Republic 1-0 at Hampden.

What was quite remarkable was the number of players on the pitch from Hearts cup winning team of 2006:

And for the Czech Republic

It’s very strange how a flight either way across the Atlantic feels like I am going home!

A tremendous break for me, now it’s time to get back to changing the world.

Before I do though, a quick photographic recap: (you can click on the pictures to see bigger versions. A busy Sunday in Edinburgh 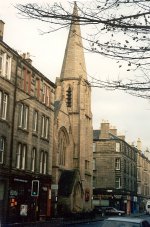 This morning started with heading off to church to St Martin’s, the church where I grew and Dad used to work.  Very nice to catch up with old friends and see some wonderful young kids running riot there! Then off to Gorgie City Farm for the obligatory visit.  Sorry no picture of the red tractor, I was having too much fun talking to the pigs! Then after lunch, Nick to his girls back to Milngavie and I headed off to see my friend Scott, his son Calum, and John (who I meet once a year […]

Had a tremendous day today, my brother Nick and his girls games through to visit and we spend a gorgeous afternoon in Edinburgh’s Botanics After tea tonight we were able to watch […]

It never ceases to amaze me how easy the trip to Edinburgh is.  This time was no exception.

I also never tire of the views (despite the weather and the tram works). I am now very comfortably settled with my parents and looking forward to spending a few days with family and friends.

Heading home for a long weekend

I am heading off to Edinburgh to spend a long weekend with family.

If you need immediate help before Wednesday please call the office or jump on live help.