Iona: BE SAVVY 19: Why did the bison cross the road?

We spent all of Saturday driving through Yellowstone Nation Park. If youâ€™ve never been there, this may seem weird, and the fact that we didnâ€™t even see everything may seem weirder, but if youâ€™ve been you will understand. Yellowstone is huge, and is amazing, like no other place on earth.

I thought about the way Iâ€™d write this post, and I decided it would be easiest to explain this in groups, as opposed the order we saw them. First category? Animals.

As a national park, Yellowstone is home to a diverse and interesting collection of animals. Being in a completely different setting than Connecticut means animals none of us had ever seen before.

We saw a lot of elk. One stood eating grass by a river as another lay resting on the opposite bank. They were a bit odd, with bodies like horses or antelopes, necks like llamas, and heads a bit like camels, but mostly horses. They had dark heads and necks, and their color lightened across their back and down their necks. We saw a bull elk from a distance, hiding in a cluster of trees. Before the ranger waved us on (too many people were stopping to watch it, and were clogging up the road), we caught a glimpse of a huge body and even larger antlers.

We saw some deer as well. A doe was standing on the side of the road, minding her three fawns. She was a beautiful light brown, and her fawns were a similar color with white speckles down their backsâ€¦very Bambi. She nibbled at the grass and watched her kids, while they moved restlessly from place to place. They all ignored us completely, despite their closeness, probably because they were used to people passing through.

I saw two bald eagles. One was perching on a half-fallen tree across a river, staring rather regally into the distance. The other, if I was not mistaken, was dancing. It was sitting on the very top of a tree right next to the road, and was bopping from side to side quite energetically. It was weird, because bald eagles seem to be such mature, high class birds.

We were driving past a large meadow some way below the road, when we noticed that a cluster of people had stopped to take pictures. We scanned the area, and finally I spotted it. A bear! She was a black bear, lumbering slowly across the field. Behind her, hardly half her size, trailed her cub. I was thrilled to see a real bear, and equally thrilled that it was happening under such safe, secure circumstances.

We were driving along a stretch of road bordered on both sides by flat grass, when out of no where started popping up these fat little mice that would stand on their hind legs and look at us with their heads tilted, then scamper back into their holes. At first we didnâ€™t know what they were, but the map we got at the entrance said they were marmots. Marmots or not, they were adorable, though impossible to photograph due to their speed and apparent inability to stand still!

The coolest animal, though, had to be the bison. They were huge and dark brown, with great hairy heads and insanely huge bodies. What made them so great? They crossed the road.

I donâ€™t know why the giant herd of bison, moving one by one and two by two, decided to cross the road. Maybe they found causing a traffic jam amusing, or maybe they were grumpy and wanted to make a mess of things. Why did the bison cross the road? The world may never know.

They proceeded to swim across the river (yes, they can swim, a lot like horses do), climb up on the other side, and head into the woods there. Maybe they did that every day, moving across the river to eat, or maybe they were heading to a different location all together. I donâ€™t know, but seeing them was something amazing that I will never forget.

Thatâ€™s about it for the animals, but not for the park! The other crazy thing about Yellowstone is its â€˜thermal featuresâ€™. These come in a variety of styles, shapes, colors, sizes, temperatures, scentsâ€¦no two are alike!

Some of the thermal features are like clear, bubbling blue pools. Others shoot pillars of water and steam high into the air, while yet others send thick clouds of steam floating over your head. Many have bright orange streams coming from them, painting the bare rock near them in vibrant shades of any color from red to yellow. The one thing they have in common? They all smell very strongly of rotten eggs. Ick. 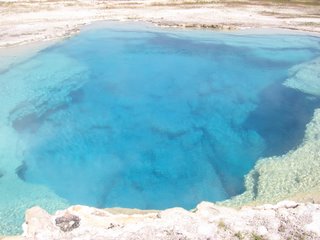 We did see Old Faithful, the famous old geyser. We were incredibly lucky with our timing. Only five or ten minutes after we arrived at the small group of geysers it is seated near, it went off. The pillars of steam and water shot way up into the air, taller than the tallest pine trees nearby. It was amazing. It went on for two or three minutes, then the water slowly sank back down into the little, unassuming hole in the ground.

Near Old Faithful was another geyser called the Castle. We were even luckier to see this one erupting, because it only happens once a day. The next eruption was scheduled to be at 2-4 am the next morning. It sent out billowing clouds of steam, and was very impressive. We watched it for a very long while, Mom especially seeming rather entertained.

We saw a small one bubbling clear water noisily, its small fountain surrounded by bizarre, almost alien orange lumps. Another was so tall and so close to the path, that its steam waves hit us right in the face, hot and smelly. There a breeze that day, though, so when you felt cool air on your face, you knew you could breathe with ease.

By favorite thermal feature had to be a large, still pool. It was perfectly clear, so you could see all the way down to the bottom. The most amazing thing about it, though, was the color. It was such an amazing shade of blue! I think I now have a new favorite color: geyser blue.