Monday we drove from Sundance, Wyoming to Spearfish, 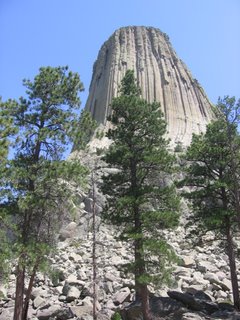 South Dakota. Before leaving Sundance, we decided to check out the Sundance museum. It was really interesting, and included things like registered sheep brands, old kidsâ€™ toys, local artistsâ€™ work, really old violin and pianos, and an assortment of other items and their histories donated by the residents of Sundance. I thought it was really cool that people were proud enough of their town that they would donate family heirlooms so others could learn about the place they called home. The town had a lot of history and a lot of pride, and that was great to see.

Across the street from the museum was the old town jail that had been restored to show what it would have been like when it was used. It also had a short history of the jail, which was used as a dog pound for a short while.

In South Dakota, before we checked into our hotel, we drove to check out something called â€˜Devils Towerâ€™. It was pretty startling, this huge, odd-shaped rock sticking up from this short clump of trees. It was shaped rather like a thimble, a cylinder smaller at the top than the bottom, but still flat on top. Gigantic vertical grooves ran up and down its sides, and it sat on a bed of loose fallen rock. Just to add to the strangeness, it was formed completely naturally.

Devils Tower was a sacred place for many Native American Tribes, and each had their own names for it. To the Mato Tipila it was Lakota, or Bear Lodge. To the Tso-i-e it was Kiowa, or Rock Tree. To the Wax?ank?sija Tibi it was Assiniboine, or Place Where Bears Live. To the Mahdo Wakupe it was Mandan, or Bearâ€™s Hat. To the Woox-nii-non it was Arapaho, or Bearâ€™s Tipi. To the Daxpitcheeaasaao it was Crow, or Bearâ€™s Home. To the Nakovehe it was Cheyenne, or Bear Lodge.

Iâ€™d be interested to know the rest of the tribesâ€™ words for â€˜bear lodgeâ€™ because the Mato Tipila and Nakovehe words, Lakota and Cheyenne, are especially beautiful.

Devils Tower was originally called Devilâ€™s Tower, with the apostrophe, but in an official document it was forgotten, and was never bothered to be replaced. Devils Tower it remained.

We took a walk around the base of Devils Tower, keeping an eye out for rattlesnakes. Some of the things we saw were burnt trees, long, partially intact pillars that had fallen off the tower, butterflies, and a jack rabbit with long, straight ears and a quivering nose crouching in the grass.

Leaving Devils Tower, we drove down a road winding

through a small bit of grassland that had the best sign I have ever seen. What was it? â€˜Prairie Dog Crossing.â€™ I burnt my arm on the hot glass of the car window taking a picture of it, but it was worth it. Of course, we had to get out to take a look around.

We saw them! I was thrilled. They look a lot like squirrels with thinner fur and hairy mouse tails. They held bit of grass in their paws the way squirrels hold nuts, and nibbled like they do. The way they ran was interesting. I expected sort of guinea pig, all four legs going at once, scurrying sort of a run, but I forgot one important thing. Prairie dogs are tunnelers that rely on strong hind legs for speed. Their run is more like a dogâ€™s bound then anything I have ever seen. It is absolutely adorable.

After that excitement, I was more than ready to find the hotel and write postcardsâ€¦lots of postcardsâ€¦